Bloomberg has been featuring articles this week that focus on the expensiveness of the market. In a recent article titled “Goldman Warns Highest Valuations Since 1900 Mean Pain Is Coming”, journalist Chris Anstey quotes Goldman Sachs saying, “A prolonged bull market across stocks, bonds and credit has left a measure of average valuation at the highest since 1900, a condition that at some point is going to translate into pain for investors.”

They go on to say that, “elevated valuations increase the risk of draw-downs for the simple reason that there is less buffer to absorb shocks…The average valuation percentile across equity, bonds and credit in the U.S. is 90 percent, an all-time high.”

We have a growing chorus of professionals making note of the expensiveness of the market and the high probability of a significant drawdown. Earlier in the week, Bloomberg ran an article titled “What to Worry About in This Surreal Bull Market”. The article quotes a number of respected professionals whose worries range from cyberattack to a plain old recession.

Why is the market expensive?

What makes 9/30/2014 significant? We just passed the 9/30/2014 operating earnings per share number.
For comparison, below are the latest trailing quarter-end statistics available from S&P:

In other words, operating earnings have only increased by $1.41 per share.

Through Y-Charts I can illustrate the data through June 2016 for operating earnings per share compared to the rate of change of the S&P500: 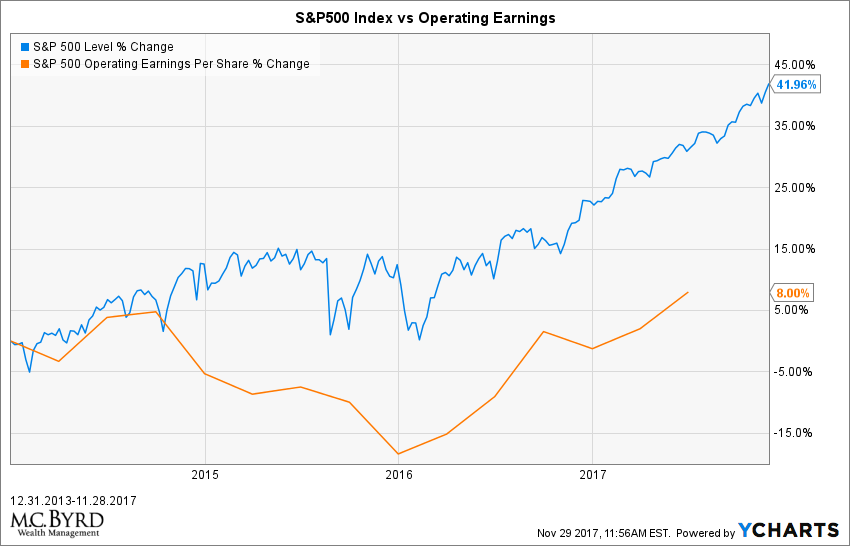 For the market to become less expensive, earnings will have to increase substantially or the price of the market will have to fall back in line with earnings. These are the only two choices.

We believe that continued caution is the best strategy at this time.