Buy not on optimism, but on arithmetic. – Benjamin Graham

When I was a senior in high school, my counselor informed me that I would not be able to graduate due to a lack of credits in PE. Long story, but I found myself in a class predominantly made up of freshmen.

Needless to say I was not very interested in PE. My focus had shifted towards college. PE class was an expensive use of time relative to the classes I could have been taking.

What in the world does this have to do with the stock market?

The stock market has a PE as well: the price – earnings ratio.

The technical definition for the PE ratio is the measure of the share price relative to the annual net income of a firm.

Suppose a company’s stock trades at $20 per share and the company earns $1 per share, the stock would have a PE ratio of 20. The higher the PE ratio, the more expensive the stock, and potentially less attractive…just like gym class.

In other words, the S&P 500 index is currently trading at roughly a 67% premium to its historical average.

Is there a rhythm to the PE ratio in the lifecycle of a bull market?

In order to answer this question, we will chart the current bull market as well as the two preceding bull markets. Below is a chart of the S&P 500 beginning in January of 2010.

I chose the beginning of 2010 because earnings started to normalize around this time following the credit crisis. As you can see by the chart, the market has continued to grow more expensive in terms of price to earnings. 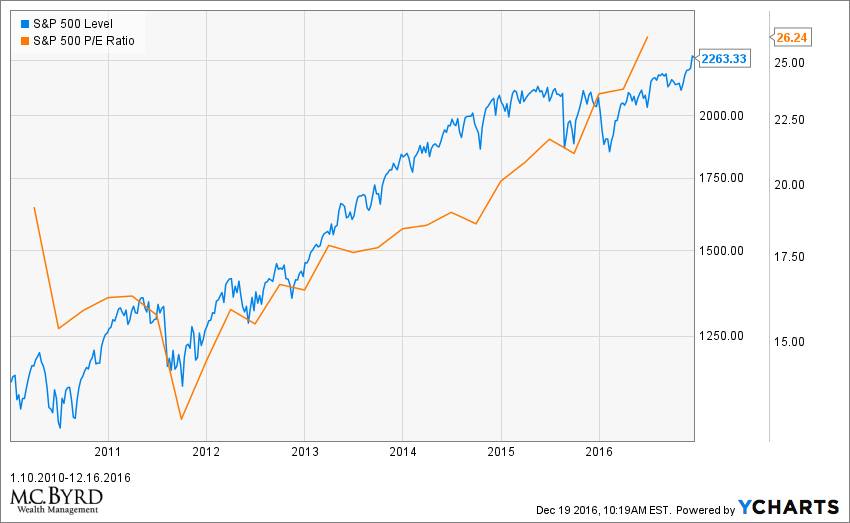 Compare this to the last bull market. As is typically the case, the PE ratio goes through a normalization process after a bear market, bottoms out, and then begins to ascend.

It is interesting to note that current PE is higher than the last bull market preceding the credit crisis. 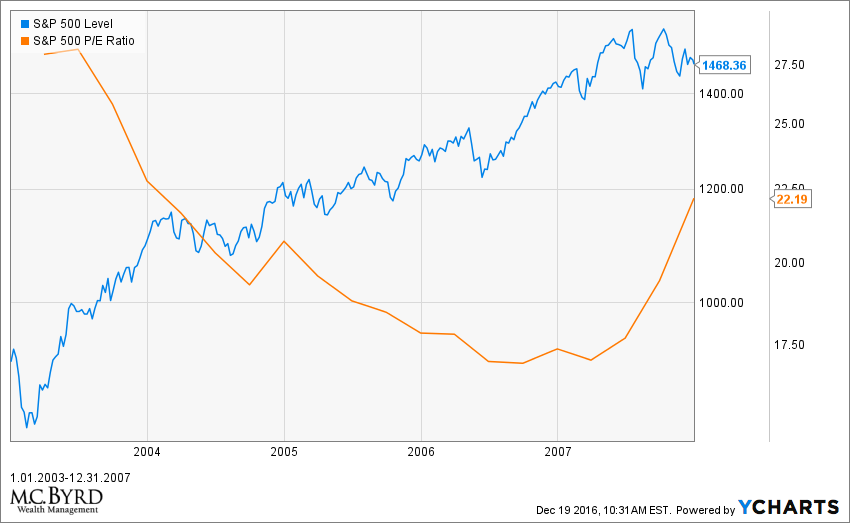 Lastly, the chart below shows the historic bull market beginning in December of 1987 through 2000. You will notice that PE peaks following the recession of the early 90s. It then normalizes and continues to rise during the bull market. 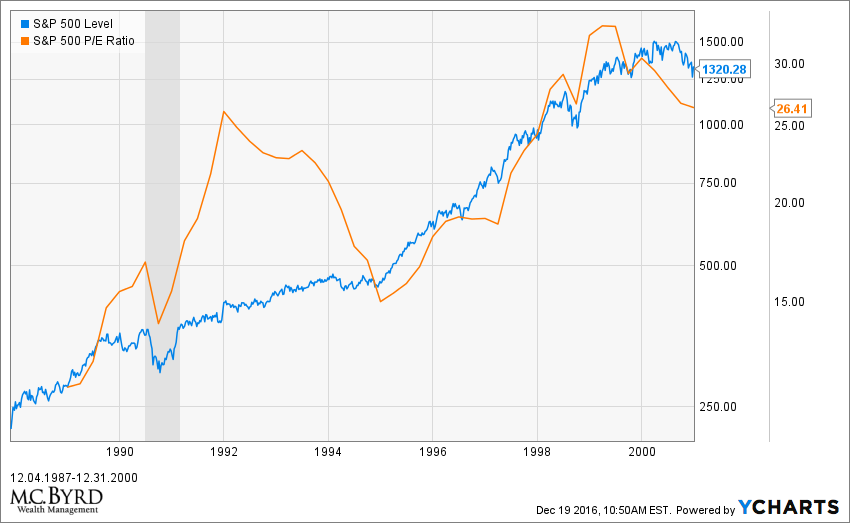 So why are equity investors paying so much more for so much less?

To be frank, market participants aren’t always rational. Warren Buffett’s mentor, Benjamin Graham, used a character called Mr. Market to explain this phenomenon and to show how shrewd investors use the irrationality of other market participants to their advantage.

Below is an excerpt from The Intelligent Investor:

Imagine that in some private business you own a small share that cost you $1,000. One of your partners, named Mr. Market, is very obliging indeed. Every day he tells you what he thinks your interest is worth and furthermore offers either to buy you out or to sell you an additional interest on that basis. Sometimes his idea of value appears plausible and justified by business developments and prospects as you know them. Often, on the other hand, Mr. Market lets his enthusiasm or his fears run away with him, and the value he proposes seems to you a little short of silly.

If you are a prudent investor or a sensible businessman, will you let Mr. Market’s daily communication determine your view of the value of $1,000 interest in the enterprise? Only in case you agree with him, or in case you want to trade with him. You may be happy to sell out to him when he quotes you a ridiculously high price, and equally happy to buy from him when his price is low…

The true investor is in this very position when he owns a listed common stock. He can take advantage of the daily market price or leave it alone, as dictated by his own judgment and inclination… Basically, price fluctuations have only one significant meaning for the true investor. They provide him with an opportunity to buy wisely when prices fall sharply and to sell wisely when they advance a great deal.

When will this bull market end?

No one knows the answer to that question. However, there is no doubt it is expensive. You can refer to my last blog 27 and You, which shows the historically elevated levels of this market.

We have only had two other markets with the Shiller PE at these levels: one preceding the dot-com bust, and the other preceding the Great Depression.

This leads us to risk.

Why is this important?

One only has to look at the drawdown of bear markets. Since 1926 the average bear market has had an average cumulative loss of 41%. An expensive market becoming inexpensive can be a painful lesson … kind of like gym class.

As we close out the year, let me wish you and your family a Merry Christmas and Happy New Year.