This trivia brings up the topic demographics. In a February 7th FT article titled “Demographic trends require a rethink of our economic model”, Anne Richards mentions that we have arrived at peak child. Children under the age of 5 no longer outnumber those age 65 and above. This has never happened in world history.

In fact, by 2050, the UN estimates that the 15 percent of the world’s population will be over the age of 65. People are living longer not only in the US but also globally.

Already we are seeing this demographic change our previous ideas of working and retirement. In the chart below by dshort.com, you will notice the rising labor participation rate by age. Since 2000 there has been a 64 percent increase in cohorts 75 and over. This increase can be found both in men and women. Women are outpacing men by staying in the workforce.

This has most likely contributed to some of the low labor participation in the younger populace. 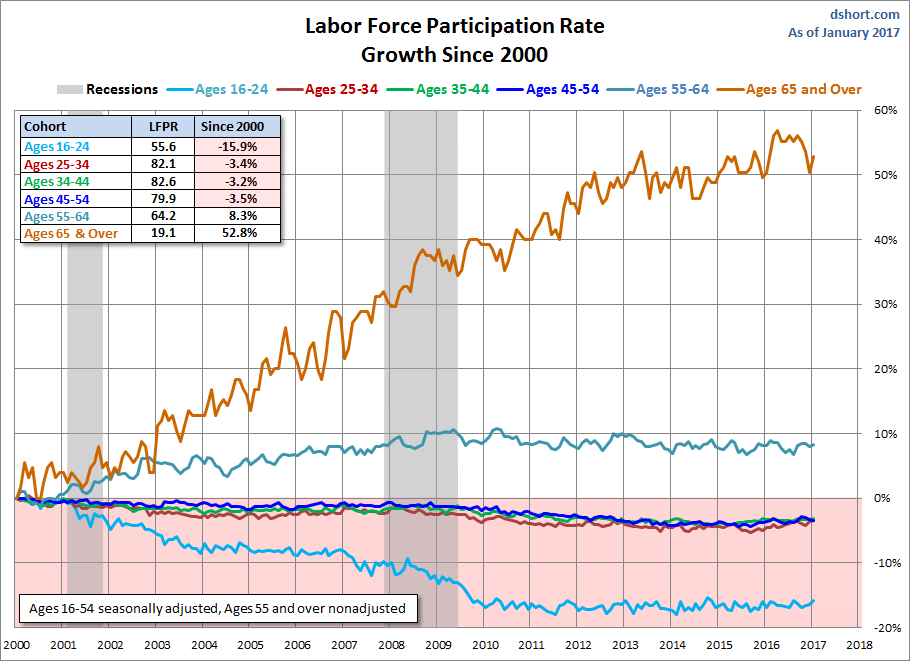 As the populace faces the idea of living longer, they are not rotating out of the labor workforce. This isn’t surprising when you consider that retirees are concerned about longevity risk in their retirement planning.

In addition to demographics changing the composite of the workforce, government and society will face challenges as people age and workforces shrink. Governments will face the challenge of caring for the elderly with a shrinking worker and tax base. Programs such as Medicare and Social Security will come under strain.

There is currently a foul mood globally for immigration. This might change as nations compete for skilled workers to help pay for an aging demographic. “Will you still feed me when I am sixty-four?”

Turn Out the Lights